My Life as a Dog

My Life as a Dog

Perhaps with him I am a dog

What was Kevin? He was earnest yet playful, boisterous yet lazy, a little rough sometimes, extremely direct and always sure of what he wanted. He was also sensitive, kind, supportive and caring, not to mention highly communicative and supremely understanding towards children.

My Life as a Dog is the funny, heartwarming and moving story of a life shared between a black and tan dachshund and his owner.
Told over two days and a weekend drawn from their many years together, it explores how Kevin overcame his cruel upbringing to flower into a self-confident dog that left everyone he met spellbound. And as they grew together, his owner learned to live in the present and navigate the difficult times they faced together.

But with Kevin rejected by the canine world and their connection ever-more profound and symbiotic, the question was: What does he think I am?

By L. A. Davenport, author of the novels The Nucleus of Reality, or the Recollections of Thomas P– and Escape, and the short story collections Dear Lucifer and Other Stories and No Way Home.
Buy now

It’s a quick read, it’s a sweet read, it’s exactly the kind of thing to buoy your spirits after a long week (or 2020). I do recommend this for you or the dog lover in your life. The Irresponsible Reader
There is only one word that could describe this book and that is adorable…I really adored this wee book and I adored Kevin and it’s clear his owner also does! Such a sweet book. Books by Bindu
A read to give you that warm feeling inside, especially if read with a canine friend next to you. Nicki's book blog
It made me think of the dogs I had growing up and how much a miss having a dog around. This is a lovely story and a quick read. Sylv.net
. . . an effective, novel, and touching portrait of a man's love for his dog . . . brimming with inventiveness and wit. The BookLife Prize

Kevin came into my life many years ago, so many that sometimes it seems like he was always there, just waiting to appear.

My life with him was in some ways simple and straightforward. A man and his dog, so close that the dog became his owner’s best friend and they did everything and went everywhere together. And a dog he was, with four legs, four paws, a long back (being a dachshund, or sausage dog, if you prefer), a whip-like tail and big black and brown eyes that shone out of his black and tan fur.

He was young when I first met him, maybe a year and a half, and he went from adolescence to adulthood, to wise maturity and slowly into a venerable old age, with grey fur and a world weary attitude to match.

All as to be expected.

Yet he was so much more than that.

He had what I understand to have been a brutal and cruel upbringing, left to fend for himself in a house that cared nothing for him and his well-being. He was pleased to leave but it was quickly obvious that, aside from the physical consequences of his hard life, he was emotionally traumatised and depressed. It was several years before he settled down, overcame his past and understand that he was loved unreservedly.

And then he stopped being an ordinary dog and become something else entirely. He developed, or perhaps revealed, an emotional depth and ability to communicate that was quite extraordinary.

He didn’t want to learn tricks, and had no patience with anyone who thought he should in any way ‘prove’ himself, but he wanted to be a part of life and to express himself and his opinion. And he had a lot of opinions. Not just over food but over when we should get up, when we should go for a walk, for how long and where, as well as what he should eat, where and when, and even what he should wear, should the weather demand a coat.

But above all, he had very strong opinions about when we should stop doing all those boring essential tasks that fill up our days and get down to that most important of things: relaxing. When he decided the day was over, he marshalled, cajoled and chivvied, directing proceedings from his distinctly unelevated position so that I or anyone else he was with would stop working, doing the washing up or whatever it might be and join him on the sofa. And when we’d had enough relaxation, he would insist that we went to bed.

For someone who would drift into working too much and for too long, he was a helpmeet.

And he was, of course, my best friend.

It took a long time to feel I could write about him, and even longer to work out what I would say. And yet earlier this year I found myself planning out a story based on three occasions in our life over the course of a couple of years.

I even decided that I would write it longhand, and bought a leather bound notebook especially. Little by little a structure emerged, and more and more of the stories that made up our life and illuminated the development of his character emerged.

And now here it is, a memoir of our life together and a record of My Life as a Dog.

My Life as a Dog is published by P-Wave Press.

Recently, I was going through my old drawings and I thought I’d share with you the original sketch I made of my lovely dachshund, Kevin, which now forms part of the cover of My Life as a Dog. 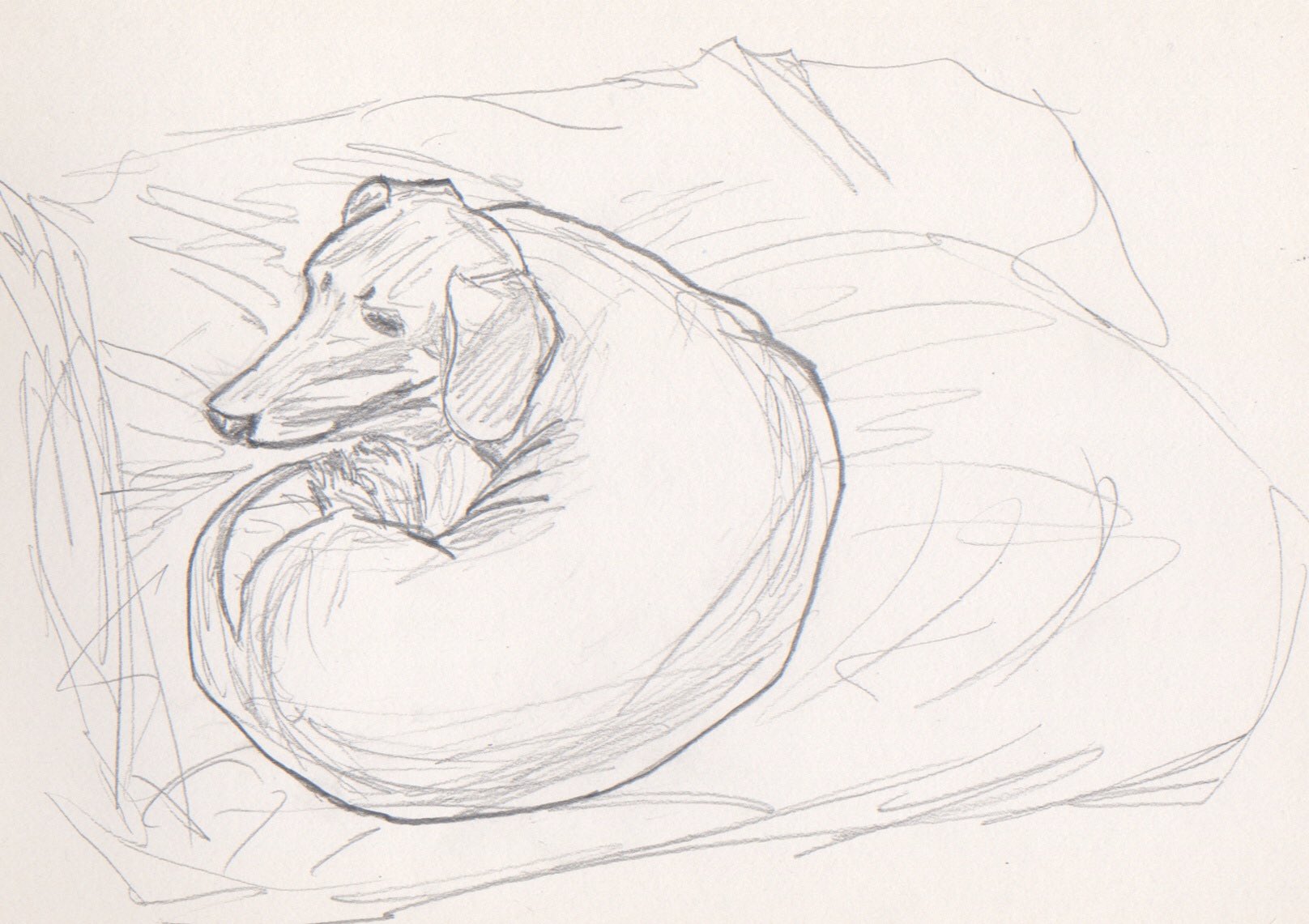 Fun fact: It was originally published as part of the collection The Marching Band Emporium, which I created while Kevin and I were still together.
← Previous
Next →
← Back to Books

Check out my latest book